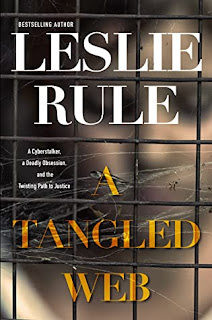 
"A Tangled Web" gives us the true-crime story of a regular guy and two women drawn together into incredibly devious murder and its bizarre aftermath. You've probably heard of this case (it was highlighted in a Dateline episode) but Rule's book really gives you the ins and outs of the murderers' catfishing over many years, and the numerous ways she used technology to track and intimidate her victims.

Rule points out that most women were very suspicious of the murderer, while men just didn't pick up on her insanity. And unfortunately, the people called to investigate the cases (arson, missing person, identity theft, etc.) were male and they seemed to have totally missed the manipulations until it was finally taken seriously and solved in a very definitive manner.

Rule is very thorough in her unraveling of the tangled web of data, but at times I wished for a much clearer focus on the murderer. However, her family did not cooperate in any way to provide background so after all the details about the case, the murderer still remains elusive in a sense.

Leslie Rule does a good job of coordinating all the information and presented it in a clear fashion but at times I wished for the deeply personal way her mother, Ann Rule, framed and enriched the bare details. Ann had a way of digging into a murder that made it heartwrenchingly personal and close to home. Leslie is not quite there yet, but then again few crime writers are at the level of Ann Rule at her finest (which I would suggest is "Small Sacrifices")

I received an ARC from the publisher, via NetGalley, in exchange for an honest review.

I've become fascinated and enthralled lately by Hamilton .... after FINALLY watching it on Disney+. It is truly greater than the sum of its parts. Beyond the amazing music, the staging, the acting, is the story of America. It's not the clean, sanitized history we learned in school. It's gritty with infighting and dubious negotiations, and it is brilliant.
And, you might want to check out Ron Chernow's brilliant biography of Alexander Hamilton. It's a long read, but so worth it!