And Every Word is True 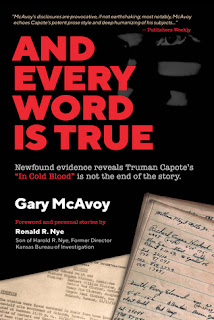 This book is currently free on Amazon via Kindle Unlimited. (5/2020)

I read Truman Capote's In Cold Blood far too young and am still haunted by Nancy Clutter, helping a friend bake an apple pie her last day of life and writing in her journal nightly, every year in a different ink color. We all know who killed the Clutter family ... but this book asks WHY were they killed?

The book repeats things over and over quite a few times, and the overall organization is somewhat strange, but here is what really struck me:

After the news spread about the murder, most of the local law men (including Alvin Dewey who was a friend of Herb Clutter) felt the answer lay close to home. Herb Clutter was not the provincial wheat farmer Capote portrays - he was the founder of the Kansas Wheat Association, had served on national agricultural boards, even had ties to the White House. And Clutter had made enemies along the way.

Richard Hickok wrote of being paid $5,000 to murder Clutter, and that after the murder they only had an hour before having to meet "Roberts." And indeed, an hour after the murders, two men who fit the descriptions of Perry Smith and Hickok were seen meeting an unknown man in a diner 30 miles or so away from Garden City.

Supposedly Frank Miles in prison told Hickok about the Clutter home and the safe full of money. Miles drew a map for Hickok detailing where each family member slept .... except the house the Clutters were currently living in wasn't BUILT when Miles worked on the Clutter farm.

The author was provided investigative notebooks from Harold Nye's son Ronald. Nye was the major investigator on the Clutter case and always felt something was hinky about the case. He always kept notebooks on hand to write his observations and thoughts. When working on this book, the state of Kansas SUED them to prevent publication. They claimed the notebooks belonged to the State, they claimed that further investigation would disrupt the privacy of the families (this despite the fact that the knife that cut Herb Clutter's THROAT is displayed in some state office lobby), they made all sorts of outrageous claims which the judge threw out and made them pay the cost of the litigation - almost $4,000,000.

Why did Kansas fight tooth and nail to prevent this information from seeing the light of day? Why does the state have so little documentation from the case and trial?

Looking at the case from the outside, there were enough clues and odd circumstances that make the motive questionable ("It was robbery, simple robbery, nothing to see here .... move along") and yet there was little in the way of trying to follow-up on any of this. The State was willing to let Capote have access to everything (and he had full access to FBI files as well) and once the book was done, according to the State, In Cold Blood was the complete and full summary of the case.

I used to lie awake at bed in night thinking of the poor Clutter family. After reading this book, I actually laid awake wondering what really brought that awful night into motion. A fascinating book that everyone needs to read and ponder. 5 stars for the material and 3.5 stars for the telling which is at times is a bit convoluted.


I received an ARC from the publisher, via NetGalley, in exchange for an honest review.