Death in a Hansom Cab 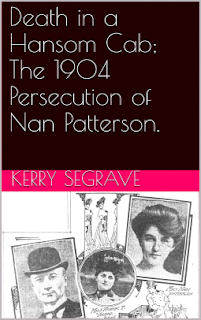 In 1904, horsing racing entreprenaur Caesar Young was shot during a hansom cab ride. The other only occupant was Nan Patterson, a chorus girl who had been involved with the married Young for a few years. After three trials, no criminal crimes were leveled against Patterson and there was no answer to what happened in that hansom cab.

On the surface, this true crime story captured my interest ..... but I quickly grew frustrated by the author's writing style of presenting newspaper reports without any intrepretation or context. We get the same details over and over again (and are often told the accounts are not accurate) but there is little in the way of background on Young or Patterson, or the nature of their relationship. There are bits of information scattered throughout but nothing developed out of the unclear facts of the case.

If the author's intent is to comment on how journalists portrayed Nan Patterson - as a homewrecker, as a sly seductress, as an unintelligent untalented actress - again, there is no intrepretation of the various accounts and no overlying theory of the crime or of Patterson's character.

This book was very frustrating to me, and I cannot personally recommend it. 2 stars.