Ted and Ann: The Mystery of a Missing Child and Her Neighbor Ted Bundy 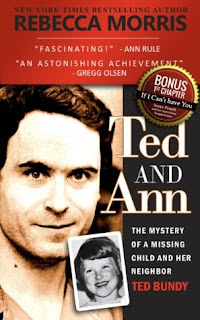 When I initially read this book in 2014, I gave it a 4 star rating Upon reading it last year, I upgraded my rating to 4.5 stars. I reread this, in light of all the Ted Bundy-related stuff lately like the Netflix series and the movie with Zac Efron playing Ted, based on his girlfriend's book.

The author contends that Bundy's first murder was when he was almost 15 and killed an 8-year-old girl in his neighborhood, Ann Burr. The book follows Ann's devastated family as they seek to find out what happened to their beloved child. Every other chapter details Bundy's family life and adulthood.

This is one of the few books I've read about Bundy that really delves into his dysfunctional family - his grandfather who was probably a sociopath, the possibility that this grandfather might also be Ted's father, Ted's abandonment at a home for unwed mothers after his birth, etc. The author writes that Ted actually transformed when he went into his "Other Ted" mode - his blue eyes became black, he got a mark on his cheek, his body odor changed, he looked totally different.

Rebecca Morris very much puts to rest the idea of a charming, educated young Republican who just happened to kill women. Bundy was a stone-cold killer who - beyond all his issues with being bipolar, depressed, abnormal brain chemistry, etc. - just plain liked to kill.