Until the Twelfth of Never : The Deadly Divorce of Dan and Betty Broderick 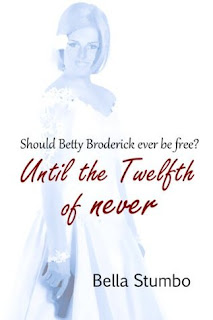 If you have been watching Dirty John : The Betty Broderick Story on USA Network, I recommend you drive into this HUGE, very well-researched book about the case.  I've seen Bella Stumbo's book referenced in many places as the best book on the subject.

An amazing, gut-wrenching book about Betty Broderick, the La Jolla woman who killed her ex-husband Dan and his new wife Linda in 1989 after a 6-year divorce and property settlement battle.

There's plenty of blame for everyone in this tawdry case - attorney Dan Broderick who used the courts to punish Betty, Linda who carried on an affair with Dan for years, and Betty who had no identity other than "wife of Dan, mother of their 4 children." And the ultimate victims were those poor children who were nothing more than pawns in this insane fight - tossed between Betty and Dan for years, uncared for, and traumatized beyond imagination.

Bella Stumbo does an admirable job but, oh lord, I just wish that it had been edited by [author:Ann Rule|9678]. Rule has the gift of succinctly relating information while Stumbo rambled over and over about much the same stories for the entire book. At over 600 pages, this book was massively overstuffed!

Stumbo presents a lot of information that shows Betty was perhaps a battered and abused woman, or maybe she was honestly driven insane by Dan and his lies. Betty also has a histrionic personality and even at the end of the book, it's debatable what caused her to totally snap. Stumbo had almost daily access to Betty in prison and had access to her diaries.

But Stumbo also does an admirable job of showing what Dan was like based on his actions in and out of the courts. With Dan, it's hard to figure out if he was actually trying to drive Betty crazy or was he just that unthinkingly cruel?

The book's title comes from Dan and Betty's favorite song - one played at their wedding - that takes about a love enduring until "the twelfth of never." Instead Dan and Betty made it through sixteen years of marriage.