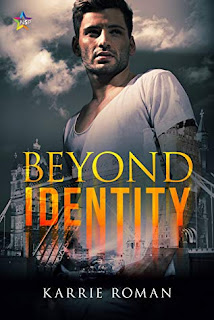 This blurb really drew me in with hints of a connection to a historical mystery and I like the overall flow of the plot as Noah and Harry, two men from dissimilar backgrounds, meet and bond together to solve the mystery of Noah's past.

Journalist Harry Cooper first learns of Noah when Noah is hospitalized after being severely beaten up in an alleyway. As part of Harry's research on the homeless, he interviews Noah and is immediately interested in both the man and his story. When Noah is shot two weeks later by the same assailant, Harry finds "it was surprisingly easy for him to drop everything and follow a man he's met three short weeks ago to the other side of the world, so they could try to figure out who was trying to kill him."

Harry and Noah quickly have cute nicknames for one another ("Pulitzer" for Harry and "Arsehole" for Noah) but there is a lot of tell here instead of show, and while the sex scenes are plentiful and passionate, at times it seems to me sex serves as a substitute for emotional growth in the relationship.
For example, after Noah learns something earth-shattering that completely guts him, this is their very first sex scene:


[Harry] What the hell could he say to make any of this mess better anyway?
"Do you know what I want right now, Pulitzer?" Noah suddenly asked into the silence.
Harry could only imagine what he wanted: answers, peace, his parents back. "What do you want, Noah?"
"I want you to fuck me."

The pacing of the story is somewhat slow in that we really don't get to the heart of the mystery until very late in the book. I don't want to spoil the historical mystery for other readers, but I find it all rather clumsy and convoluted as the motivation for murder and attempted murder; also Lord Bolingbroke, Noah's long-lost uncle, is very much a one-dimensional character.

Personally, this book did not work for me but I feel I'm probably the exception here because I could not get past the "shallow sex" and the odd way in which the author uses the historical mystery subplot. 3 stars for "Beyond Identity" and as always, Your Mileage May Vary.