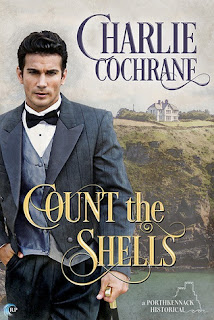 Michael returns home from WWI intact, but not unscathed. He's haunted by his battlefield memories as well as the men he loved and lost because of the war. As he returns to his family's summer house in Porthkennack, the memory of Thomas Carter-Clemence, his first love, is front and center. And when he meets Harry Carter-Clemence, Thomas' younger brother, he is gobsmacked by how much he looks like his dead brother Thomas. There is an attraction but Michael wonders if he can get past his feelings for Thomas and move on.

This is very much an English family drama including Michael's sister Caroline, her husband Eric and their children Richard and Lily, and the Gray family's interaction with the Carter-Clemence family ... and the secret we learn as the book proceeds. Some readers may find the pace of the story rather slow (okay, very, very slow) but I liked how Cochrane really gets the setting and time period right and the family interaction sets the tone of the book. However, about halfway through, I did wish that the pace of the story picked up!


We learn that Thomas is not the person Michael thought him to be, but Michael's knee-jerk reactions to burst out in anger or flee when confronted by unpleasant details make me think that Thomas is not the only hero with feet of clay. Harry is an interesting character, but unfortunately we only get Michael's POV throughout and I didn't really get a sense of a strong sexual chemistry between the two men.

I enjoyed the time period and the way Cochrane shows how WWI changed the life of the men who served, as well as their families. The pace was slow, and I didn't really buy into the relationship between Michael and Harry. 3.5 stars.