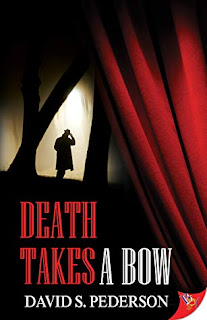 "Death Takes a Bow" drops us into the midst of the dress rehearsal for a Milwaukee theatre production titled "Death Comes to Lochwood." There's a rich tapestry of characters here, three of whom share a past that includes a death of a fellow actor and a betrayal, a drunken husband / ingenue wife pair, the harried director who desperately needs a packed house, an actor who may be on the brink of getting a part in a Hitchcock movie, Alan Keyes (making his stage debut in a non-speaking role), the diva's ward / assistant, and a completely obnoxious Broadway "star" everyone in the theatre had a reason to despise. Toss in a supposed ghost haunting the venue, and David S. Pederson's latest mystery has plenty of suspects as well as red herrings.

As the book began, I will admit to being somewhat confused by the huge cast, but the pre-opening night cast party scenes helps flesh out the characters, as well as their pasts and motivations. And when the obnoxious actor, Shelby Berkett, is murdered on-stage on opening night, it falls to Detective Heath Barrington and Alan to solve the murder. The plot really explores the full range of motives and opportunities and keeps your interest to the denouncement.


As in past books in the series, Heath and Alan's relationship is all off-page, but Heath makes an interesting comment about the nature of deception:


"Don't we all do that to some extent or another, Heath? Isn't that a part of life, getting along?"I glanced over at him, and I knew he was right. I was playing a part right now, keeping my true self hidden, and that was indeed a part of life. Of my life, anyway. And it was necessary for my survival.

But there's also a lovely scene near the end of the book that puts into words the feelings that Alan and Heath share for one another, but can't openly share because of the time they live in and their jobs in law enforcement. All in all, an interesting murder/mystery and an apt depiction of the times. 4 stars.