Honey from the Lion (Love Across Time #2) 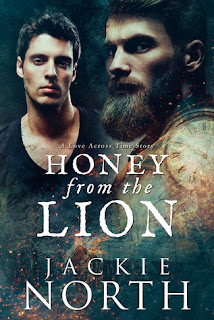 24-year-old software developer Laurie takes a vacation at a Wyoming dude ranch, and after a night under the stars complete with cowboys playing harmonicas, steak on the grill and ghost stories, he wakes up in the middle of a snow storm. After struggling through snow drifts in his new boots and Carhartt jacket bought especially for the trip, he finds a small cabin and when a man dressed in a buffalo hide coat opens the door, Laurie is convinced this is part of some enhanced dude ranch experience.

Except Laurie has gone back in time to 1891 and the man in the cabin, John Henton, is suffering PTSD from his role in the Indian Wars and wants nothing more than a quiet place "so he can lick his wounds and recover from the horrible sights his eyes had beheld." On the other hand, "Laurie's first goal with anyone he met was to get them to like him by making them laugh at his antics." Sigh.

I have to admit that Laurie irked the heck out of me in the beginning of this book, and thankfully he manages to curb this annoying habit before too long (just about the time he stops acting like a brat and accepting that maybe he is stuck in the time period) and for me, that's when this story became very interesting.


This is definitely a slow-burn romance and the pace of the story is gentle as Laurie becomes accustomed to a life without cell phones, electricity, instant gratification. But it's fascinating to learn of all the minutiae of daily life and how these two disparate men learn to love one another.

For John that journey is difficult and Laurie appreciates how monumental it is for this gentle man to embrace his sexuality. Their love story is wonderfully done and really carries the story. The details of the time period feel authentic and after a bit of a rough start with Laurie's antics, the story totally drew me in and I was enthralled by this story.

I have just a few niggles, for one, we only get Laurie's POV ... but on the whole, I really enjoyed this story of two men who find a love together. 4 strong stars for "Honey from the Lion."