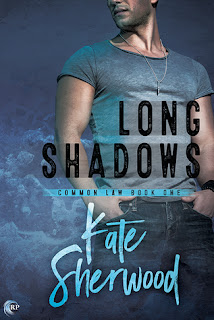 Raised in Mosely, a small Montana town near the Canadian border, Jericho Crewe and Wade Granger were boyhood friends and lovers. "He and Wade had both been raw and exposed, and it had only made sense for them to press themselves together, offering less tender flesh to the outside world." When they were 17, Jericho left ... and Wade stayed.

15 years later - during which Jericho spent 8 years in the Marines (four tours in Afghanistan) and 5 years as a beat cop in LA - he returns to Mosely after the death of his father, only to be surprised by a step-mom and two young half-sibs ... and a whole mess of trouble.


Wade seems to be running drugs, guns, and god-knows-what to the border and back, and he's got his fingers in every scheme in town. But when push comes to shove, does he have Jericho's back? Is the pull of their past love strong enough after all these years?

This story sucked me in from page one and held my interest every last page of the way. Kate Sherwood spins an intriguing mystery with dirty cops, kidnapping and shoot-outs and balances it with the slowly-unwinding story of the relationship between Wade and Jericho. There is not ONE sex scene in this book - just one kiss - yet the tension between Wade and Jericho is heady and potent with possibility.

The end of the book brings about a resolution of the kidnapping, but leaves a whole bunch of questions. Is Wade involved with Jericho's father's death? Did they catch all the dirty cops? Wade and Jericho are pretty much on opposite sides of the law - who's planning to change sides? This is a great start to a new Kate Sherwood series and I give it 4.5 stars.