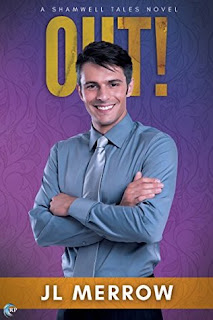 Mark Nugent finds himself in Shamwell after deciding to take a year away from his career as a tax advisor so as to try his hand at raising his teenager daughter Fen after she was expelled from school. As his ex-wife Ellen says: "It’s about bloody time you took some responsibility for your only child.” It's also bloody time Mark starts to explore his attraction to men, yet when he meets hot Shamwell local Patrick, rather than act on their mutual attraction, Mark instead decides he needs to hide his sexuality from Fen - “She’s not going to find out. That’s what I’m trying to tell you.” Mark took a deep breath. “There’s not going to be anything to find out. That’s why we can’t do this.”

Sadly, this was only the first time I dearly wanted to whack Mark sharply about the head with a Clue Stick. Mark and Patrick don't have a relationship as much as a running series of three steps forward, two steps back arguments that lead to them feeling the relationship is OVER, and then a few days later they are back together until the next miscommunication. The pace of their relationship slowly unfolds, ever so slowly, so slowly in fact they finally have sex in the last chapter of the book.


The overall pace of the book didn't work for me, and I'm realizing the entire Shamwell series is too slowly paced for me. I like the small town setting of the series and how characters from other books in the series pass along the edges of each additional story, but this series is like baseball, 18 minutes of excitement crammed into a 2-1/2 hour game.

Don't get me wrong. Out! has some great secondary characters - Mark's former personal assistant David with his costumed teddy Gregory (they called him "Camp David" in the office), Mark's daughter Fen, Patrick's gender fluid assistant Lex, Barry and the Spartans - but they are the 90% while Mark and Patrick's relationship is that slim 18 minutes. 3 stars for Out! (although I am very partial to the John Barrowman-esque cover)