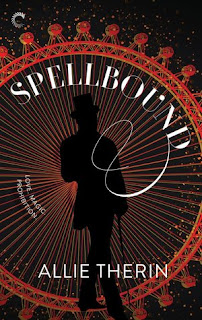 Author Allie Therin introduces us to the New York City of 1925 - a world of jazz, Prohibition, crime, corruption, speakeasys, skyscrapers ... and paranormal magic. Arthur Kenzie - Congressman Kenzie's son, former soldier, Harvard quarterback - has surrounded himself with paranormals, like Jade with her telekinetic powers and Zhang who is an astral walker. Then Arthur comes across Rory Brodigan, who has the power of psychometry:


"Think of magic as radio waves. Most paranormal powers make magic - most powers transmit. But magic also broadcasts its own signal, and some powers receive. Your psychometry receives magic into your mind from the objects you touch."

The author does an admirable job of world building as Arthur (also called Ace) and his band of paranormals try to find out the who, what, when, where and why of a mysterious shipment arriving in NYC - a relic, an "object that's become a vessel for magic," something with unknown destructive power. In the midst of saving NYC, Arthur uncovers Rory's secret past while Rory rails against Arthur trying to help him, in my opinion, for far too long. There's building sexual tension, and then there's endless variations of Rory taking exception to almost everything Ace says and does. But finally, finally Rory and Ace become lovers (in mostly fade-to-black scenes) but there is a palpable attraction between the two.

The plot is innovative and interesting, and the stage is set for the continuous of the series with lots of unanswered questions and adventures. The relationship building is a bit too slow for me personally, and as a result the pace of the story feels slow at times. But the suspenseful ending really brings everything together and I''m looking forward to reading the next book in this series. 4 stars.