The Evolution of Love (World of Love Series #29) 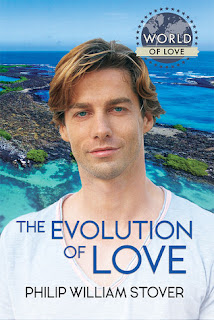 Title: The Evolution of Love (Worlds of Love Book 29)

I'm unfamiliar with Philip William Stover, but he is now firmly on my "Must Read" list. I read this book in one sitting (in the dead of night because I couldn't put it down) and adore the flow of the author's writing style that just draws you into the story.

Mike is a talented artist but pays the bills with a stressful job as an account manager for a communications company. Mike's Aunt Penny (formerly his uncle Paul) is leading a luxury cruise tour to the Galapagos Island and wrangles Mike into teaching watercolor classes. And surprise, surprise ... Mike's ex, Benton, is also on board as a wildlife lecturer during the cruise.

Benton is basically a well-endowed Disney Prince with a killer British accent and "a jawline so defined you could use it as a ruler." Benton and Mike have chemistry to spare but their view of life is a bit different:

He had this happy, well-adjusted attitude that, at first, I found quite charming, but eventually it became infuriating. He never understood why I stressed about work or why I worried about getting a promotion. He believed good things were always waiting to happen. I believe that you brace yourself for the worst at all times and wait in the cellar until the tornado passes while eating expired cans of fruit cocktail.

What follows is a playful romp through some typical romance novels scenarios but the author makes them fresh and fun, although I could have done without the weird subplot involving a mysterious telegram. And for a novella that doesn't have a lot of on-page sex, the sexual tension here is fully ramped up and makes for a very enjoyable read! In closing, let me share my favorite sentences from the story: