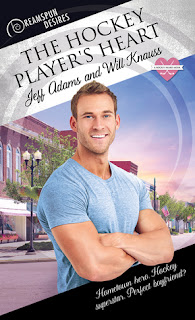 Caleb had a crush on Aaron Price, his geometry tutor during high school, and years later they meet again back in their hometown of Foster Grove when professional hockey player Caleb is recovering from an injury suffered while playing with the New York Rangers. Aaron is a third-grade teacher at Foster Grove Elementary working with his best friend (and Caleb's sister) Pam. The two men reconnect, first as friends, but when their dynamic changes into something much more sexually charged, there are a lot of issues that need to be addressed

Caleb is out-and-proud and doesn't play games about his interest in Aaron while Aaron is gun-shy from a relationship with a closeted professional athlete when he lived out in California. Also Caleb lives and works in New York City, while Aaron is comfortably settled in Foster Grove, a three-hour drive away.

There are so many things I liked about this book. First although Aaron and Caleb knew each other in school, this isn't a tale of an angsty second-chance-at-love, but rather a definite spark of interest that slowly kindles into something more. Caleb thinks how "He hadn't been this comfortable around a man he was attracted to in longer than he cared to admit."


Both men are adults and they each speak their minds with no huge misunderstanding or miscommunication (one of my pet peeves), although Aaron isn't completely exempt from stupid bone-headed decisions. "All of the reasons why a relationship wouldn't work had come from Aaron, while Caleb remained the optimist and actively shot them down." Caleb and Aaron work with a kid's hockey league team and the kids feel authentic and real, instead of perky little urchins brought into the story just as a subplot.

There's a sweetness along with the sizzling chemistry between Aaron and Caleb and their love story is definitely romantic. The ending is especially lovely with Aaron finally realizing that he just needs to follow his heart, which leads him right back to Caleb.