The Mystery of the Moving Image (Snow & Winter #3) 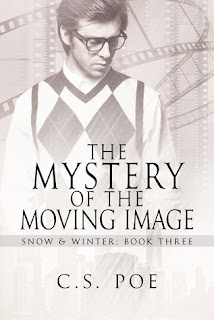 The Mystery of the Moving Image is the third book in the Snow and Winter series. Although it could be read as a standalone, don't miss out on reading the first two books in this great series!

Calvin and Seb have just moved into an apartment together, Calvin is seeing a therapist and is dealing with his PTSD, they now have a puppy named Dillon, and Sebastian has just received a mysterious crate at Snow's Antiques Emporium, with a kinetoscope inside. This sets into motion a mystery involving a pre-1900's film showing a murder, a few murders in the present and a slew of suspects (including Calvin's ex-boyfriend Lee Straus).

I love the plot of this book - C.S. Poe manages to provide readers a sweeping background of arcane historical happenings and writes with such clarity and assurance (insert fangirl gushing here). Sebastian's father and ex-boyfriend Neil make an appearance, with Neil and Seb reaching an uneasy "friendship" of sorts:

[Neil] I'm not talking about an open investigation with you.
[Sebastian] "What about an ID on Dumpster Kid?" I continued.
Neil crossed his arms. "I know there's nothing wrong with your hearing."
"It's be nice if you'd tell me."
"So Winter can kick my ass seven ways to Sunday?"
"I'm trying to help."
"Helping never helps," Neil answered.
"You should be a motivational speaker," I replied.
Neil shook his head. "I'd nearly forgotten what a salty son of a bitch you could be."
"You started it."

The love and chemistry between Calvin and Seb sizzles as always, but Sebastian is finally allowing himself to believe that he deserves this happiness with Calvin and that they are "imperfectly perfect for each other." I have such a soft spot in my heart for Sebastian:


"I get self-consious. There are some days .... when I'm wearing mismatched clothes, have crumbs on my sweater and the clerk at CVS gives me a dubious look when I buy condoms because she'd sooner believe I'm making balloon animals out of them than getting laid."

Although it took me a while to remember Calvin and Sebastian's history, once I got back into the mystery, the book held my interest every page of the way, and while the ending was all times of good, I didn't want the book to end. But never fear, there are a few free Snow & Winter ficlets and codas on C.S. Poe's website and there is another book in the series coming. 5 stars and a Recommended Read for "The Mystery of the Moving Image."