Wild as the West Texas Wind (Love Across Time #3) 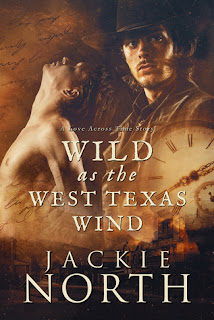 FYI -- "Wild as the West Texas Wind" builds on the second book in the series "Honey from the Lion" but I think this could perhaps be read as a stand-alone (although you'll definitely want to read Laurie and John's love story - it's a good one!).

After receiving a mysterious letter from Laurie (dated 1892) via Western Union, his best friend Zach travels to Colorado to see if he can unearth any information about Laurie's strange disappearance. A freak storm sends him to 1892 and in the grip of a band of outlaws led by Tom Ketchum (who, it turns out, was a real-life outlaw who rode with Butch Cassidy's Hole in the Wall Gang). Zach is immediately enamoured with one of the outlaws, Layton, but can't reconcile Layton's outlaw ways with his gentle personality.


I must admit that the pace of this story did feel a bit too leisurely at times as Tom Ketchum plans to sell Zach at an upcoming slave auction in a nearby bordello (a plot device that I found somewhat ... jarring), but the delay does give Zach and Layton time together to get to know each other and gives us the opportunity to see what lies beneath Layton's quiet ways. We learn that Layton's choice at age 15 to throw his lot in with Tom Ketchum had really been the only option he had. We feel Layton's isolation as he thinks he may be the only man to feel this attraction for other men. We see his longing for a different way of life:


But now, standing beneath the darkening sky, he [Layton] saw the light of kerosene lamps in the small town being lit one by one. Glowing golden smudges flickered from behind squares of glass framed by swaths of curtain, as though the houses and buildings themselves were holding the light close, not letting it escape into the darkness. Layton could see the lights just the same, each one representing the one thing he did not have, the one thing he truly longed for; a sense of place he could call his own.

The romance between Zach and Layton is not a sex-filled romp but a slow reveal and a gradual realization that works well in this setting. I loved the ending which gives us more details about Laurie and John and I hope that the next book in this series will bring Zach and Laurie's friend Maxton into the mix.

5 stars and a Recommended Read for "Wild as the West Texas Wind."