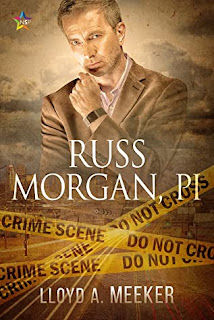 "Engima" is a novella (about 60 pages) introducing Rhys (Russ) Morgan, a 50-year-old former alcoholic private investigator, who reads auras. Russ is tasked with uncovering who is blackmailing televangelist Howard Robinson's son James, who about 15 years earlier had been miraculously cured of the "sin" of homosexuality via a conversion (read torture) camp.

We get a resolution to the situation, but it is secondary to the nuanced development of Russ' character and past.  Russ is trying to overcome the wreckage alcohol brought about in his life:


In my case, I'd driven away a smart, gentle, loving partner by hiding in a bottle  and hadn't seen much of love since I crawled out. Maybe I never would. But I wanted another chance at it now. I may have been fifty, flawed, and a little psychic, but I was as real as I'd ever been in my life. Some nights I wanted another chance at love so bad the longing was a metallic tang along my tongue.

In "Blood and Dirt" (roughly 190 pages), Russ is hired by Evan Landry to learn who trashed his sister's (legal) marijuana grow on their Colorado family ranch. Russ is thrown into the middle of an extremely dysfunctional family feud that turns deadly.  Meeker does a great job of keeping us involved in the mystery, yet again the best thing about the story is Russ' character growth.

In the throes of a new relationship with Colin - who is 26 to his 50 - Russ has to confront his own ageism (As Colin tells him: "Maybe there's nothing you can do about what other people think, but you've gotta take care of your own shit. [...] You've got to, because you're the only one who can.") as well as realizing while he lost the love of his life, maybe there is more than one right man for him, and maybe that is Colin.

I'm so glad I discovered Meeker and feverently hope he continues to share Russ Morgan and his cases with us.  Darn it, I want to see Colin and Russ' relationship grow and deepen, and I  hope that Deputy Sheriff Heath Baker pops up now and then (and that he finds his own love).  4.5 stars and a Recommended Read!

I received an ARC from NineStar Press, via NetGalley, in exchange for an honest review.