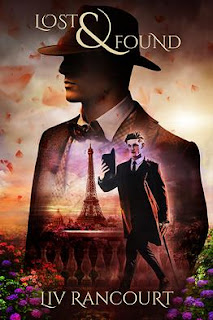 Read book blurb here
"Lost and Found" is set in post World War I Paris, with Rancourt beautifully recreating the mystique and magic of the era.  Our characters briefly meet the Parisian avant-garde including Gertrude Stein and Alice B. Toklas, and a newcomer, Ernest Hemingway briefly flits through the pages. While reading this book, I could vividly recall walking the streets of Montmartre in the shadow of the Sacré-Coeur during my trip to Paris.
Just as a perfect Paris afternoon must be slowly savored, you need to set aside any expectations of a quick read and just immerse yourself into the setting, and the slow careful reveal of American doctor Benjamin Holm and the enignmatic Louis Donadieu.  Impeded by severe post-traumatic memory loss, Ben has returned to Paris to find his boyhood friend Elias; they both served in the war yet Ben returned home alone and has returned to Montmartre to track down Elias.  He struggles to make sense of the war, make sense of his haphazard memories, and recall his fleeting memories.  He is hampered by his inability to remember.
Louis Donadieu is hampered by a physical impairment that has left him as a dance instructor instead of a premier performer.  He lives in the shadow of what he has lost, and that commonality draws Louis and Ben together. Their relationship slowly develops and as with most things in this book, it's a bit slow and a bit hesitant, but it's definitely worth the wait.
But while I appreciated the slow course of their relationship and the gradual unfolding of Ben's truth, toward the end of the novel the author takes a direction that did not work for me, personally.  I don't want to reveal too much, but I felt the final 30% of the book could have been tightened up.  But again, your mileage may vary.
Overall, I give Rancourt kudos for a wonderful setting as well as Ben's journey to uncover his past, and give "Lost and Found" 4.5 stars.