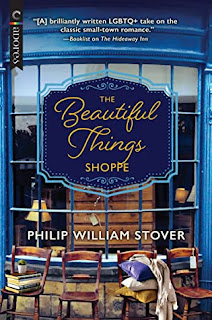 I am a big fan of the author, and was hooked from his first book Evolution of Love (reissued as There Galapagos My Heart). Stover has a way of creating very charming stories that are fairly non-explicit but full of all the feels, plus some very satisfying HEAs. In this second book in the "Seasons of New Hope" series, we meet Prescott J. Henderson and Danny Roman, co-owners of The Beautiful Things Shoppe, stocked with beautifully crafted antiques and neoclassical furniture ..... and little blue Smurfs and Nyform trolls.
Stover's plot is well-woven together with a background of the diverse, welcoming community of New Hope, numerous interesting secondary characters (as well as brief glimpses of Vince and Tank from the first book in the series - The Hideaway Inn) and loads and loads of really interesting details about a wide range of interests - from Danny's scholarly interest in fine art to Danny's joyous love of popular culture.
Danny and Prescott are opposites in so many ways. Danny gives off a "mixture of cruise director, children's television host and Sexiest Bear of the Year" while Prescott "looks like he's about to start his first day of prep school in his blue blazer and khaki pants."  Prescott and Danny bond over the possible destruction of two buildings in town - one a mid-century modern bank that "looks like something from an episode of The Jetsons" and the second a Victorian home that is "a stunning example of nineteenth-century craftsmanship in the Second Empire style."
And once they finally find some common ground, they slowly move into a tenative relationship where each man still harbors hurts from past relationships.  Danny also keeps a HUGE secret from Prescott (which he doubles down on) by hiding the fact that his family is incredibly wealthy, as in Bill Gates level wealth. There are reasons for doing so, but dude, keeping a secret like that never ends well.
Sure, the villain of the piece is pretty clearly defined, the predictable Huge Misunderstanding tears our MCs apart and the HEA is also predictable, albeit happy and well-deserved. But, overall, Stover does a great job with the setting and the quirky natures of our MCs and their lovely love story (along with shed-loads of useful information.) The Beautiful Things Shoppe is a feel-good story from top to bottom.  4.5 stars.