The Queer Principles of Kit Webb 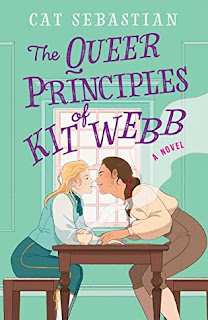 Title: The Queer Principles of Kit Webb
Author: Cat Sebastian
Publisher: Avon
Release Date: June 8, 2021
Genre(s): M/M Historical
Page Count: 352
Rating: 3.5 stars out of 5
Read book blurb here
In 1751, when one is a former highwayman - called Gladhand Jack with a bloody ballad written about him - with a fairly devastating leg injury, what does one do? Well, in Kit Webb's case, open a coffee house in London and grumpily serve up his haphazardly-spiced brew to any number of malcontents and radicals.

All right, you lot. Somebody's been scribbling Tory nonsense in the privy walls. Every eye in the room was on Webb, as if he were a magnet. He wasn't even raising his voice above his usual scratchy growl. You want to write Tory slogans, you do at it the coffeehouse across the way with the rest of the Tory scum. [...] Here, we serve Whigs and radicals.

When Lord Percy waltzes into Kit's - wigged, powdered, replete with gold braid and brass buttons and lavender stockings - Kit is intrigued, and unsettled when Percy at first does little more than stare (and occasionally wink) at him.  But it turns out Percy wants to hire Kit to rob his father of a book, a very important book he keeps with him at all times.

The plot synopsis really grabbed my interest in selecting this book, but honestly, I could have done with quite a bit less ... umm, plotting.  There are simply shed-loads of plot here - Kit's backstory, Percy's mother and her Machiavellian child rearing, Percy's horrid father, Percy's childhood friend Marian who is now married to Percy's father and has a small daughter, the blackmail scheme that starts all the plotting, and not to mention Betty and Robb in Kit's sphere.  AND Marian seems to have an entirely separate existence as some sort of wall-scaling ninja, and I suspect there may be another book about Marian and her adventures.

Then .... there's the planning and training for the highway robbery, along with a slow burn growing between Percy and Kit, but loads more plot and intrigue and swordplay. I'm somewhat torn between this book - liking the essence of the story, but as I read on, getting rapidly weary of all the tangents.  And finally, there is a sex scene, and a rather hurried rush to a short epilogue that leaves me with more questions.  A deeply conflicted 3.5 stars, but I'm hurrying off to read more of Cat Sebastian's works to see if perhaps this particular book is an outlier.