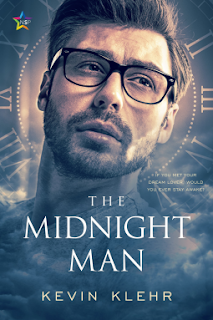 Title: The Midnight Man
Author: Kevin Klehr
Publisher: NineStar Press
Release Date: August 30, 2021
Genre(s): M/M Fantasy / Paranormal
Page Count: 189
Rating: 3 stars out of 5
Read book blurb here
The blurb for "The Midnight Man" grabbed my interest.  Stanley, on the cusp of his 50th birthday, has been in a relationship for seven years with his partner Francesco, and it is in its death throes.
Stanley has dreams - very vivid dreams about a young man - Asher - and each time they meet in dreams, Stanley is five years younger. He has the chance to disappear into a dream world with his perfect dream lover ... yet as he becomes younger and younger, he relives his happy memories with Francesco, looks objectively at times in his life that changed its course, and ponders why he is terrified of police officers and why he never continued a potentially successful career as a flautist.
I like many things the author has to say about age and second chances ...

[...] if you don't play it right, age can be your nemesis. That thinking all your major achievements are a thing of the past can be your undoing. That what you know and what you've done have value, especially to those who haven't experienced what you have to share.  [...] There's power in age, my son. It's not a death sentence. It's a blessing.

,,, but what didn't work for me is the rather deplorable actions both Francesco and Stanley take - with each other and with their friends and acquaintances. Simply put, Francesco is a philandering jerk and Stanley is thoughtless and cruel more than once or twice.

Also, I found the author's writing style somewhat convoluted and the whole Midnight Man dream world too lightly fleshed out, and the resolution to why Stanley is afraid of cops was sort of shoe-horned into the story after teasing it for the entire book.

Personally, I liked the premise of this story but found the main characters very unlikeable and it was hard to root for a HEA for them.  But again, this is my own personal opinion and your take on this story may be entirely different!  3 stars.