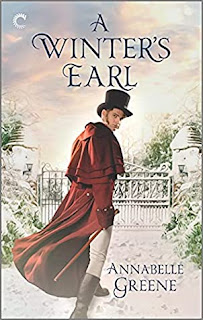 Title: A Winter's Earl
Author: Annabelle Greene
Publisher: Carina Press
Release Date: November 9, 2021
Genre(s): M/M Historical Romance
Page Count: 298
Rating: 3 stars out of 5
Read book blurb here
Have you ever been a fan of a long-running soap opera? Recall all those scenes where two characters talk constantly about .... "talking"? As in, "We really need to talk about our feelings" or "Why can't we just talk about Devon's terrible accident?" or "I've decided to finally tell you .... my deep, dark secret" as they stare off into the distance and furrow their brow? \Yet somehow they never actually TALK, while miscommunication, HUGE misunderstandings and MASSIVE secrets pile up like sands in the hourglass .... (Yup, that's a Days of Our Lives reference.)
I loved Annabelle Greene's The Vicar and the Rake and adored the wonderful second chance romance, as well as the way she crafted her MCs and the secondary characters. And starting in on "A Winter's Earl" I had hoped to find the same sort of cohesive story that grabs your attention and won't let go.
However ... reclusive poet Sherborne Clarke and moody self-exiled Earl of Portland, Richard Ashbrook are wrapped in their mutual misery of a youthful infatuation and so-very-hot affair cut short by betrayal. The betrayal is all they talk .... and NOT talk about ... for almost 300 pages. There is brow-furrowing aplenty and numerous angry scenes ending with Richard storming off, while Sherborne suffers in noble silence. We get POV from both MCs, yet I never found myself gaining a deeper understanding of either character.
The secondary characters are also somewhat murky and unfleshed out, while the plot device to get Richard and Sherborne together is lightly explored, in my opinion. Personally, I felt this particular book was a near-miss, but I continue to admire Annabelle Greene's work and look forward to reading more from her. 3 stars.
I received an ARC from the publisher, via NetGalley, in exchange for an honest review.