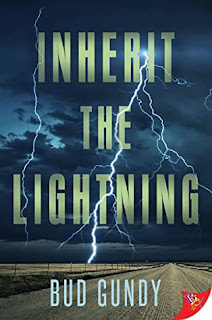 Title: Inherit the Lightning
Author: Bud Gundy
Publisher: NineStar Press
Release Date: May 10, 2022
Genre(s): Historical
Page Count: 260
Rating: 4.5 stars out of 5
Read book blurb here
The author tells a sweeping story of Cooper Tiller and his rise to incredible wealth in turn of the century America, and frames it with two additional stories - a tragic school fire in Collinwood, Ohio in 1908 and that of his great-grandson, Darcy, in modern-day Cleveland, Ohio attempting to find a mysterious beneficiary listed in Tiller's will.
Coop's story is engrossing, born in 1880 into a hardscrabble life on an Ashland, Ohio farm, but after failed crops and the death of his parents, he trades the farm for some property on Lightning Mountain in Harrison County, near the town of Cadiz, in the Appalachians. And on his journey, Coop meets recently orphaned Will:

Coop would hand over every dollar, the rest of his days, even his very soul to repeat a few moments of a buggy ride through the Appalachian foothills with Will. He'd only just met Will the night before, and they rode squished into a single small buggy with a chatty old hillbilly named Elmer. Somewhere on that bumpy road when they were little more than boys, Coop and Will fell in love.

The story really shines as Coop and Will build their cabin near Nightmare Lake, sustained by Will's skill as a trapper, and Coop eventually finds his seam of black bituminous coal, changing his and Will's lives forever. Again, I loved all the details Gundy provides about coal mining, In fact, his explanation of how coal came to be deposited over epochs in the mountains is downright lyrical. Fun fact: did you know that miners worked naked due to the heat underground and because clothing caught on the narrow tunnels?
Gundy also shares how gay men of the era had little protection, from small town America to the skyscrapers of huge cities, with the law looking the other way if something should happen to them. In much the same way, Coop's friends, the black Whitney family, thread this thin line as well.
But life changes, people change, circumstances change, and the later part of the book moves in a new direction, equally as enthralling, as the author introduces us to many secondary characters who each play an important part in Coop's life. And later on, the Collingwood school fire comes more clearly into focus and provides the impetus for Coop's later years, and the circle is complete when Darcy and his newfound love Jake learn they share a bond built on the past.
When I first started Inherit the Lightning, I felt it wasn't really in my wheelhouse - a boy on a farm in the middle of Ohio? A coal mine? But it quickly grabbed my attention, and my heart, and while the book is about 260 pages, honestly I would have read this book if it were twice as many pages. The author bites off a huge chunk of history and gives voice to a whole range of characters, historical events, and shapes it all into a really beautiful, haunting and hopeful tale.
My only niggle is that Darcy's story just wasn't as gripping as Coop's, and the importance of the Collingwood fire doesn't really unfold until much later in the book, but the main story is wonderfully done and I highly recommend this book. 4.5 stars.
I received an ARC from the author, via NetGalley, in exchange for an honest review.