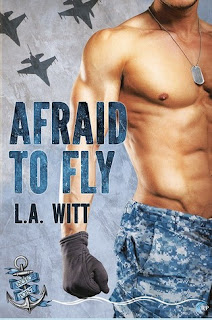 Afraid to Fly, the second book in L. A. Witt's Anchor Point series, features two older MCs - Travis (45) and Clint (40) who each bring a boatload of issues to the relationship. Former pilot Travis deals daily with the excruciating physical effects of a crash and ejection and wonders how long he'll be able to pass the biannual PRT. Sworn to absolute secrecy after a horrific incident that occurred while he was remotely piloting a drone, Clint's subsequent battle with alcoholism cost him his marriage and children. Each man suffers from PTSD and nightmares.

This is no light sexy romp on its way to a Disneysque HEA and with Travis' constant back pain and his committed relationship with Motrin and a TENS unit, there's a lot of blow jobs and frotting in lieu of an@l sex. Witt doesn't portray this as a "less than" relationship, and the sex is hot as hell.


There is a LOT of introspection and long long internal monologues on the part of both men and in my opinion this really slowed down the flow of the story. I rarely skim, but found myself continually checking my progress on the book as it seemed to really drag along in the middle. At 347 pages, Afraid to Fly felt a bit bloated. There is also a Unilateral Decision made by Travis that seemed pretty boneheaded, but the ending gives us Travis and Clint on the way to a work-in-progress HEA. And BONUS we also get to check in on Paul and Sean and their wedding.

L.A. Witt really knows her stuff in crafting M/M military romances that deal with the havoc military life can wreak on relationships and families. 3.5 stars.