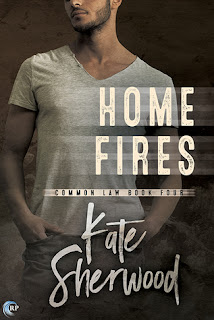 Home Fires is the fourth and final book in Kate Sherwood's Common Law series and the series goes out with a bang, as in let's blow sh*t up and it is straight-up magnificent.

BTW, I finished the last chapters of Home Free on a plane, and then watched the 2016 remake of The Magnificent Seven starring Denzel Washington and Chris Pratt. It was a perfect combination since Home Fires, similar to The Magnificent Seven, is basically the residents banding together to defend their town against a heavily-armed force - in this case, survivalists / militia marching into Mosely to break some of their group out of jail. Just imagine Wade Granger played by Chris Pratt, and you're in the right frame of mind.


Finally, finally, Wade and Jericho are on the same page. Whatever they end up doing, they're doing it together: "In the future, if Wade was going to be in danger, then Jericho would be right beside him. Keeping him safe, hopefully, but at least doing something, being there for whatever happened, good or bad." But first they need to survive an all-out assault by the militia, complete with grenades, rocket launchers and a little something special cooked up by Wade:


“You didn’t like my ‘run away’ plan. Now don’t tell me you don’t like my ‘blow shit up’ plan, either, or my feelings will be hurt.”
Jericho stared at him for a moment, then shook his head. “I f@cking love your ‘blow shit up’ plan. Is there more of it?”
“Maybe.”
“I love you.” The words were out before Jericho knew they were coming, and he panicked a little. “Your plans. Your explosions. Your—” Wade was still so calm, but looking back at him with a light in his eyes, a light that Jericho never, ever wanted to extinguish. “Your you,” he finished. “I love you.”
“And you’re not just saying that because we’re both about to die?”
“Maybe I am. But that doesn’t mean it isn’t true.”

As endings go, this one is perfect. Wade and Jericho get their HEA underway, Sheriff Kayla Morgan kicks some serious butt and shows the FBI how it's done, the townsfolk band together and Nikki might actually get an honest job.

You can almost hear the strains of The Magnificent Seven theme (dum-DA-DA-dum, dum-dum-dum-DA-DA-dum) as they stroll down Main Street. 5 stars for the entire Common Law series!