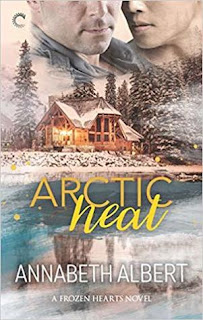 I've read and really enjoyed the first two books in Annabeth Albert's Frozen Heart's series, and this book is my absolute favorite. FYI - we very briefly met Quill and his partner Hattie as they rescued Reuben and Tobias after their plane crashed in the Alaskan wilderness in "Arctic Wild," but rest assured, even if you haven't read the other books in the series, this book works very well as a stand-alone.

Ranger Quilleran Ramsey has spent 20 years telling people he is married to his job ... which he feels is safer for his job and reputation than telling anyone he's gay. Quill is the epitome of the strong silent type:

He'd never figured out why some people enjoyed filling a perfectly good silence with inane questions. He'd had colleagues for twenty years without ever needing to have a deep chat or fill in personal details." [...] God, he hoped they didn't assign him a talker for the winter. That was the last thing he needed.

Owen, a cancer survivor, is social (or as his sister says "aggressively extroverted), confident, out-and-proud and determined to experience the sort of life he dreamed about during cancer treatments. "Something about the past few years had turned him off pretension, made him value genuineness because time was really too short to deal with fake people and their fake problems."
And when Owen volunteers as a seasonal park volunteer, these two very dissimilar men are assigned to spend the Alaskan winter season together maintaining a ranger station.

Although there are a few secondary characters, this book focuses almost exclusively on Quill and Owen in their small cabin over the winter. Annabeth Albert absolutely shines in crafting their relationship as it grows and deepens ever so slowly; although some readers may find the pace slow, I absolutely loved the depth of the character development. You really feel like you know these two men, inside and out, by the end of this novel. And while I'm not the hugest fan of disaster or tragedy to hammer home a resolution, again I love the way the author uses a life-and-death situation to really crystalize the way Quill feels about Owen.

I love almost everything about this story - the rich character development, the Alaskan backdrop, the way their sexual relationship enriches Quill and Owen, the slow and steady pace and an ending that gives our MCs their well-deserved happiness. 5 stars and a Recommended Read for "Arctic Heat."