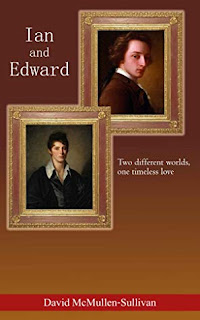 I'm a huge fan of well-written time travel romances, and in selecting this book to review, I was very interested in the 18th century England setting and the 21st century time travelers who arrive to investigate a murder. However, while the plot has possibilities - as Ford says "So to make it out alive, we need to investigate a murder, uncover a thief and rebuild a time machine" - the execution leaves a lot to be desired.

When Ford and Angelica are sent back to the 18th century and their ship / time machine malfunctions for unknown reasons, they learn they have arrived too early and must bide their time quietly living in the English countryside avoiding detection. Unfortunately, neither is particularly good at this ... and before too long, they rent a huge estate, attend numerous social events, give someone modern medicine, Angelica breaks out her "black spandex jumpsuit" and Ford aggressively falls head over heels in love with virginal Ian. There is no on-page sex here and I do not get a strong sense of any sexual chemistry between Ian and Ford.


Too much of the plot is told rather than shown, there is little character development throughout and events occur randomly. For example, Ford and Angelica meet Ian's Aunt Cora and within a few sentences, consider her their Aunt Cora and exclaim of their love for her, while a romance occurs with no build-up or rational explanation for an unlikely couple. Finally, there are far too many editing errors here, i.e. "you're" instead of "your" and sentences with missing words.

While I like the world building and find the core of the time travel plot intriguing, the lack of in-depth character development and the stilted language do not work for me. 3 stars.