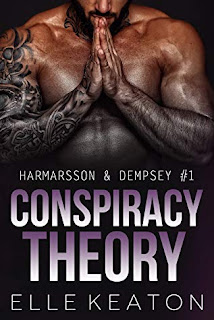 
1) Don't judge this book by its cover (which, to me, says I'm a MMA fighter who owns a tattoo shop), 2) and do not hesitate to dive into this gripping tale!

After a particularly difficult case, stoic Seattle detective Niall Hamarsson finds himself drawn back to his grandparent's cabin on a small island in the San Juans (an archipelago of islands in the Pacific Northwest near Seattle) where he spent his childhood. Mat Dempsey has also returned to the island from San Francisco and is now serving as Sheriff. The two went to school together on the island and there's always been an awareness of each another which bursts into some seriously hot UST when they meet again.

A murder in the close-knit community brings up old rivalries between island families, and Elle Keaton balances the murder mystery aspect beautifully with the wary relationship between Niall and Mat. Niall is a fascinating character and the author gives us tantalizing tidbits of Niall's past:

Niall wore the disguise of domesticity well: the facade worked for him as a detective - maybe that's why he was a good detective. He was still feral and wounded on the inside, and the veneer of society was wearing thin these days.

Mat is dealing with a seriously underfunded department and lack of expertise, and as the murder case develops, he struggles to solve a murder that ends up hitting too close to home. For the most part, the plot is beautifully interwoven with the simmering sexual tension between Niall and Mat, and the pace of the book is perfect as we are drawn into the case. The only niggles I have with this book is the ending of the murder case and the revelation of one of the major players which seemed ... unrealistic. Without saying too much, I'm aware this book is the first in the series, and I hope we get more of a resolution about the murder case, revealing an additional suspect because as the murder mystery stands, it doesn't feel complete.

I highly recommend "Conspiracy Theory" for its tight plotting, slowly developing relationship between Niall and Mat (and the equally slow unraveling of Niall's past), paired with a compelling murder mystery. 4.5 stars.