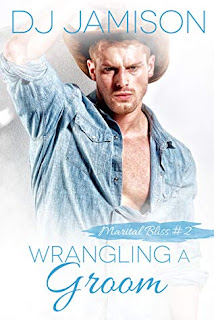 Wrangling a Groom is Book 2 of the Marital Bliss series, but it can be read as a standalone.

Wyatt and Diego grew up together on the Triple J Ranch, becoming passionate lovers in their teens, with plans to marry and work the ranch together as adults. However, their plans were derailed when Wyatt's grandfather demands Wyatt choose between his love for Diego and his love for the ranch - and Wyatt seemingly picks the ranch. Six years later, Diego returns for GrandDad's funeral and the two former lovers, now both 25, confront their feelings.

I like the premise and promise of this plot - two boyhood friends to lovers dealing with lost love in the midst of saving the ranch- but thoroughly dislike Diego who is a self-absorbed dick. When 19-year-old Diego leaves the ranch, he holds that anger close over the years and uses it to fuel his life of loads of sex and no commitment. Early on Diego comes to the realization:


No one should have to choose between the person they love and the future they want. Diego could see now that Wyatt has been trapped between two ultimatums. Grandad had wanted him to choose the ranch, and Diego had wanted Wyatt to choose him - but they'd both forced Wyatt's hand.


The plot moves forward as Wyatt and Diego work the ranch, while creating a wedding venue as a new source of income. Yet Diego continues to make Wyatt pay for his decision and the pattern continues with "Diego Flores fucking [Wyatt] like a madman and treating him like shit afterwards" and Wyatt apologizing and feeling guilty about his decision. The pace of this story feels agonizingly slow to me because Diego cannot move forward, cannot quite yet tell Wyatt he forgives him and loves him. And while Wyatt and Diego have an amazing amount of hot sex around the ranch, I found myself skimming the scenes.

Catching up with Caleb and Julien, the MCs from "Surprise Groom," reinforces how wonderfully their love story unfolds - and how Diego and Wyatt's relationship does not have that complexity and growth - and that, despite the potentially interesting plot and truly prodigious sex, makes this book a miss for me. 3 stars for "Wrangling the Groom" with a side note that Your Mileage May Vary!