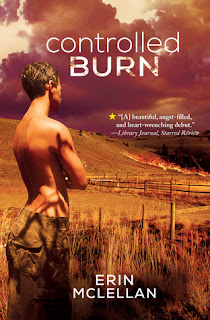 
I'm stunned to learn that Controlled Burn appears to be Erin McLellan's first novel. I absolutely love McLellan's writing and the way this story unfolds. Joel's first love was his high school boyfriend Diego, but Diego was ashamed of being gay and in small-town Nebraska, they hid their love. As Joel later recalls, "Even as a teenager, I had been locked so securely in the closet with Diego I’d never let my guard down."

After Diego's tragic death, Joel goes to college, keeping people at a distance because he is terrified of letting go of his secrets, and grieving by shutting down his emotions and using sex to "screw the memory of my dead boyfriend out of my head.” When he meets Paulie in a class and they slowly become friends ("I could do this. I could be there for Paulie. I could be a good friend. I didn’t have to close myself off all the time.") and then gradually into lovers, there is just something so fragile and beautiful about how Joel feels about Paulie, how he treasures this "sweet beautiful boy" who "looked like home, and nothing had looked like home in a very long time."


The sex is incredibly hot, but in McLellan's hands, it is also touchingly sacred:


... until Paulie, I had forgotten that sex could mean something. That making yourself vulnerable for another person was a gift, not a perfunctory stepping-stone to orgasm.

But memories of Diego keeps Joel from accepting joy in his life, and accepting Paulie's love. Joel feels he can't share his past with Paulie ("The lies kept me safe, kept me in control.") and isn't ready for Paulie to surplant Diego. Joel's struggle to accept love and give love is so wonderfully played out in Controlled Burn and there were moments reading this book that I actually sobbed because I was so deeply moved.

5 stars for Controlled Burn, and I highly recommend it. 5 stars.