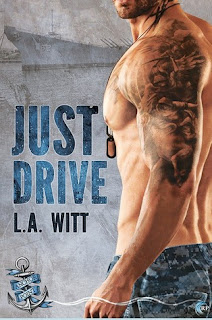 
Ooh, L.A. Witt does M/M romance in a military setting so well! This reminds me of Conduct Unbecoming, one of my favorite L.A. Witt novels, about two men's relationship in the shadow of the military's fraternization policy.

Paul Richards is the CO of the Anchor Point NAS, with over 24 years under his belt, looking to achieve admiral before retiring. One night after breaking up with yet another boyfriend, he hails a cab and tells the driver "Just drive." Before the night is over, Paul and the driver Sean have a blisteringly hot one-night stand ... which quickly turns into something more. At first their only problem seems to be age - Paul is quite a bit older than Sean (20+ years) - but soon they learn that .

I loved the relatively low-angst relationship between Paul and Sean and how they strive to do the best for all involved. L.A. Witt really shows that conflict between family and career and the hell that can cause relationships. We get Paul and Sean's POV alternately throughout the book, but I felt that Sean remained a bit of a mystery, i.e. we are never told exactly how old he is, and I'm not even sure what he was studying in college. 4 stars.