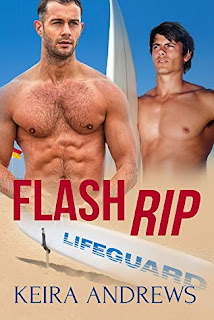 Keira Andrews has given us some interesting depictions of Australia in "Honeymoon for One" and "The Station" and in "Flash Rip" Andrews dives into the lives and loves of lifeguards on fictional Barking (think Bondi) Beach. Andrews gives us some great secondary characters and shows us the closeness and friendships between the lifeguards, as well as insight into what they have to deal with daily, and along with all the crazy Aussie slang, the first part of this book is really a fun, interesting read.

In pondering why this book does not work for me, I finally realize that I don't want to read about the romance between senior lifeguard Liam Fox and the new recruit Cody because 1) the lifeguard part is really interesting and 2) their relationship is so dysfunctional. Liam (imagine a gorgeous Hemsworth or two) is deeply unhappy ... and deeply closeted.


Liam spends all his time hiding his sexuality with a set of a crazy rules and essentially takes sex vacations to hook up with people unaware of his former celebrity status (he was an AFL footy star until he blew out his knee) and then shows them the door quickly afterwards. Liam is also afraid to ask for what he truly wants during sex; because of his build it's easy to assume Liam is a top while he's a hungry bottom. Finally Liam isolates himself from his family because he is unable to cope with his deeply homophobic father.

While there's plenty of really hot sex between the two, it does not translate into a healthy relationship. I realize other readers may not feel the same way, but I cannot get past this issue, and my rating for "Flash Rip" is 3 stars.