The Mystery of the Bones (Snow and Winter #4) 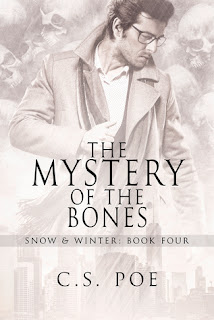 Title: The Mystery of the Bones (Snow & Winter Book 4)

I swear, each time I read the next book in this amazing series, it takes me a while to get back up to speed on who killed who in what weird and wonderfully disgusting way. But the one thing that never changes is Seb:


"Apparently, I've got a reputation on the streets."
"What kind of reputation?"
I shrugged. "Busybody, know-it-all, I guess."
"And habitual dead-body discoverer."
Couldn't argue with that.

Sure, Seb is a caustic smart-ass but the other thing we know about him is that he loves Calvin, as in "He was my partner. My soul mate. The love of my life. And ... sometimes I had to remind myself that I was those same things for him." And especially in this final book in the series, we see how far Seb will go to save Calvin when he is reluctantly drawn into murders influenced by the American Bone Wars in the later part of the 19th century.


In this final book in the series, Sebastian is planning their wedding (as he says "something I knew literally nothing about"), Neil and Seb finally have a comfortably quirky friendship, Calvin's working partnership with Quinn is solid, Sebastian's father is doing well, there may finally be a reconciliation of sorts between Calvin and his family - it just seems like everything is coming together for everyone in the Snow & Winter universe.

As I set this book down, I had the sense that this world would continue to grow and evolve for these characters because C.S. Poe has set into motion an amazing family of characters who continue to live in my head. FYI - Poe does have a coda on her website featuring Sebastian and Calvin stranded in an airport set after "The Mystery of the Bones." My wishful thinking is that she continues to give us brief glimpses of their life together, and gosh darn it, wouldn't it be nice to get a short novella where Neil finally comes out and finds himself a man and some happiness?

5 stars for "The Mystery of the Bones" and a solid 5 stars for the entire Snow & Winter series. I cannot wait to see what comes next from C.S. Poe!