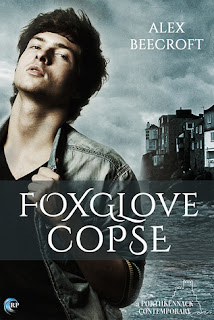 Sam Atkins lives a lonely existence, given to crippling anxiety attacks, traveling around Britain in a small converted van (think tiny tiny house) and faking normality during his infrequent contact with others. He has just settled in a small secluded woodland outside of Porthkennack when he comes upon a gruesome ritualistic sheep killing, and is immediately suspected of carving up the sheep (with a chainsaw) and placed under police investigation. The landowner's nephew Ruan is fascinated by Sam and once he learns that Sam is not a "sheep-mutilating cultist" they work together to find the culprit, as well as the person who is cyberbullying young people in the area .... to death.

Foxglove Copse works as a mystery / suspense with two intertwined plot lines, and the unraveling of what exactly is going on is intriguing. Where the story fails, for me, is the romance between Sam and Ruan.


Ruan is firmly entrenched in the bosom of his family, and it's almost alien to him that Sam is so estranged from his family and their influence. We get glimpses of what may be the root cause of Sam's anxiety, but Sam's personality seems so intangible and undeveloped:


“He’s like he’s got one foot in fairyland, you know? Like he’s too special for this world."

With the sex scenes off page and not a lot of character development, there just isn't enough chemistry between the two lads to make you feel invested in their relationship. Also, the pace of this story seems so slow - with a very melancholy feel - until the ending finally pulls everything together in a somewhat unexpected way.

I ended up very much on the fence about Foxglove Copse and gave it 3 stars. I think the story will appeal to some readers, but it did not work for me.