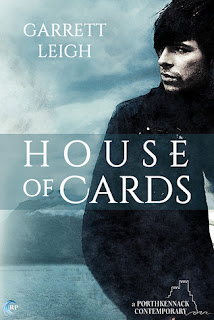 Garrett Leigh writes eloquently of the Cornish setting of House of Cards with its bays, inlets and caverns perfectly suited to smugglers and wreckers who lured ships onto the rocks in order to loot their cargos.

While some of Brix's family still continue the Cornish tradition of freeing goods from their former owners, Brix himself rescues poor bald chickens destined for the slaughterhouse, and gathers people like Lee who is trans, Jory, and Kim and Lena with their open relationship and "all that free love and stuff" as Lee says. And when Brix happens upon Calum dejectedly sitting on a bench outside the Truro train station, he at first thinks he's seeing things.


A few years back in London, Brix was Calum's friend / mentor in the tattoo arts, although to Calum Brix was more of a "f@ckin' beautiful legend" who brought out Calum's latent bisexuality. There was a sexual energy to their friendship, a certain "rightness" that would have eventually been explored, but Brix abruptly left London and Calum hooked up with his horrid ex Rob and in fleeing Rob's stifling influence, Calum is left homeless as well as jobless.

As always, I marvel at how Garrett Leigh manages to craft stories of grace, acceptance, love, forgiveness and compassion that, in the hands of other authors, might have become an angst-fest of epic proportions. Leigh doesn't really expand on Calum's abusive relationship with Rob but even the hints of what it was like are equal parts sad and terrifying. But as Calum comes out the other side of that dysfunctional relationship, Calum realizes:


He’d run blindly into Brix’s life with his own bag of bullshit, but the longer he spent with Brix, the more he realised the closest thing to a best friend he’d ever had was drowning under the weight of something Calum couldn’t see. And perhaps he always had been.

What transpires between Brix and Calum is slow and nurturing and perfect because this isn't one of those sex-on-every-surface stories. I think this might be the best book in the Porthkennack series so far, and I'm giving House of Cards a solid 4 stars.