Gabriel and the Devil 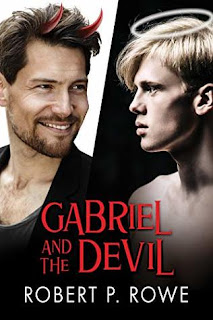 Title: Gabriel and the Devil


I find it very difficult to review this novella without basically giving away the premise of the story, so I'm going to apologize in advance for revealing the full plot. You have been warned. Proceed with caution.

Read the blurb very carefully for Robert P. Rowe's "Gabriel and the Devil" because it's easy to assume that you know the premise, which is what I did in beginning this tale. A story about a devil corrupting an angelic fairly naive young man by tempting him with devilishly good sex? Sign me up!

I really enjoyed the first part of the book where Gabriel is tempted by Marcello and realizes that giving up his eternal soul really isn't that bad a deal. The two young men have a very real sexual attraction and the story definitely held my interest. I also loved how Rowe discusses theology along the way, presenting Marcello's contention that evil is needed in the world as a means of contrasting good, and he presents some interesting ideas that evil in the world in fact brings about good.

Until ...
we learn that Marcello really isn't the devil; he's a shy young man who has had a crush on Gabriel since they were both young men and in wearing his devil's costume on Halloween and introducing himself to Gabriel, he though Gabriel was in on the joke. But naive Gabriel, raised Catholic and a former altar boy, truly believed Marcello was a devil.

Okay. At first I felt duped. Darn it, I was promised a story about a devil and an angel! But after carefully reading the blurb, I realized that wasn't the case. Then I grew to admire Robert P. Rowe's writing in that he dupes us the way Marcello duped Gabriel and it added another layer to my understanding of the story.

Overall, Rowe totally had me at the theology and the "twist" worked for me. I ended up liking "Gabriel and the Devil" and gave it 4 stars, but I think other readers may have a different perspective. Read this one and let me know what you think!