Tigers on the Way (TIgers and Devils #4) 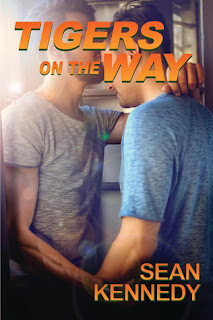 Title: Tigers on the Way (Tigers and Devils Book 4)

Returning to the "Tigers and Devils" series by Sean Kennedy is like catching up with old friends. Fran and Roger are busy with their kids, Nyssa has volunteered to be a surrogate for Simon and Dec, and almost eight years on, Dec and Simon are still madly in love and driving each other crazy at times:

"You're up to something," he said over lunch. "I don't know what it is, but I guess I'll find out soon enough."


"I'm not up to anything." I replied, trying to look as innocent as possible sipping my coffee. "I'm just trying to make your life easier."
"Why start now?" he mused.

It was banter like this that sustained us, and often showed the true emotion we felt for each other. When Dec said why start now, what he meant was "I like our life together. I wouldn't want any other person in the world, just you."

Dec and Simon have bought a new house (a converted firehouse with the fireman's pole ... and possibly a ghost) and are ready to embark on parenthood when Simon's health scare shakes them to the core:

If it was happening to Dec. It almost made my knees buckle beneath me, and I finally understood how he felt. The thought of the person I loved more than anybody in the world and who I relied upon for so many things to get through this life - the thought of Dec being sick without a single thing I could do about it - made me want to vomit.

I don't want to reveal too much but it's worth every tear and every moment you want to knock Simon alongside the head and tell him to stop being so goddamned unreasonable: "I hated exposing my feelings to my family. It was all part of growing up in the closet. You got so used to safeguarding your own truth, it was actually injurious to your mental health if you being letting go." The thing I love about Dec and Simon is that they are gloriously imperfect (well, Simon more than Dec, definitely) but they are perfect for each other.

We are left at the end of the book with them on the cusp of a new phase of their lives, and I sincerely hope we get another episode into their lives (and possible marriage since this book is set in 2016 prior to Australia passing their same-sex marriage law in in 2017.) 5 stars and a recommended read for "Tigers on the Way."