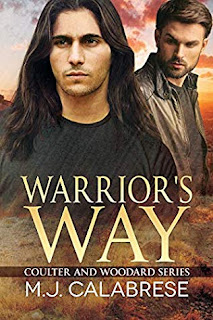 
There's a LOT going on in this book, and underlying it all is the relationship between Eagle and Adam who have been friends since childhood. Eagle, an Albuquerque Detective, is out and proud while four-times married and divorced Doctor of Forensic Sciences and Psychology (read profiler) Adam is straight. Well, let's just say, Eagle is completely convinced Adam is straight, except for:

Sure they'd tease and touch each other sometimes intimately, but this was a byproduct of years of familiarity. Comments and looks that might have been misconstrued as sexual were easily dismissed as just having a good time.

Also everyone in the department thinks Adam is gay and there are "stories in the local gay community that Adam Coulter swung both ways, but Eagle dismissed them." Well, alrighty then.

Eagle and Adam are called in on an FBI case involving especially brutal killings of gay couples. FBI Agent Rick Kessler is supposedly the brightest and best, on the fast track to becoming Bureau Chief. Yet his plan to draw out the killer involves a wedding between Eagle and Rick (with a few days' notice) and an unclear plan to stop the killer using Eagle and Rick as bait. Indications that the killer may actually be two individuals working together is completely dismissed by Kessler without any investigation. Also he doesn't seem overly concerned the survelliance cameras have been tampered with. Finally, there is a bizarre bathroom scene where Kessler pins Adam against the wall, asking "Do you always go commando, sweetheart? Or did you do this for me?" and later says ("while grinding his rock-hard cock against Adam's ass") "If I wanted to rape you, sweetheart, you couldn't stop me." Ewww.


At this point, I almost DNFed the book, not only for the out-of-control plot and numerous instances of dubious police work, but because there is so little chemistry between Eagle and Adam. There is a lot of "tell" here, but little "show." In addition, the killer(s) are fairly obvious and the torture of the victims is disturbingly violent (which may not bother others as much as it did me).

At the end of the day, "Warrior's Way" has too many subplots and tangents and strange asides that are undeveloped or abruptly dropped into the narrative. I didn't believe the relationship between the two MCs and while the case quickly grinds to a halt and the relationship situation is definitely a cliffhanger, it just didn't work for me. 2.5 stars and as always, your experience with the book may be totally different.