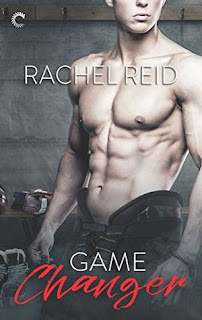 Scott Hunter, captain of the Admirals, is a loner, not necessarily by choice, and hiding his sexual orientation means no romantic dinners out, no plus one for charity and team events, taking vacations where he isn't well known and picking up men away from the watchful eye of the media.

But when Scott meets Kip, everything changes. Not as quickly as Kip, who is out and proud, would like but for a man whose entire life is dependent on hockey, Scott slowly comes to realize that he can't hide in the closet forever. The chemistry between Scott and Kip sizzles, and the sex is plenteous (so so much, that I actually skimmed through a few steamy scenes nearer the end of the book) and totally off the chain.

The plot is a good one and I love the hockey setting, but too often we get a brief synopsis or small snippet of a play where I would have liked to get more actual hockey play. Since Scott is the captain of the team and several players are secondary characters (and the upcoming second book in the series is about a pair of hockey players), getting a feel for the on-ice dynamic would be nice.

The relationship angst here is nicely done, with Scott realizing that he needs to make a decision, and I like Kip's understanding, but his impatience as well. The ending is all sorts of sweet and the epilogue is perfect. All in all, a very good debut novel from Rachel Reid and I'm anxiously awaiting the second book in the series, Heated Rivalry. 4 strong stars for "Game Changer."