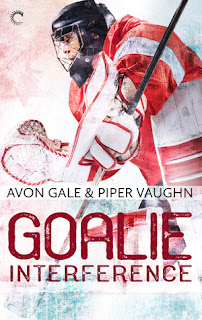 "Off the Ice" introduced us to the Atlanta Venom and gave us a hot-as-all-f@ck romance between defenseman Tristan Holt and Professor Sebastian Cruz. In "Goalie Interference," we are back in net with Venom veteran goalie Ryu Mori and smoking' hot newbie Emmitt Armstrong just called up from the AHL. With the Vemon starting position up for grabs, there is no love lost between the two goalies.

Ryu appeared briefly in the first book in the series, yet his character seems so lightly fleshed-out here, although we get more of a glimpse into Emmitt's personality. But since we don't know much more at this point other than Ryu and Emmitt are attracted to one another and quickly become f@ck-buddies, it's hard to become personally invested in their story at this point. However the authors do a good job of keeping us up to date on Tristan and Sebastian, as well as truly funny asides by and about Morley, aka "Tripod," and no, he's NOT a photography enthusiast.

But finally around 50%, Ryu and Emmitt begin wondering if their arrangement could possibly bloom into something more. As Emmitt thinks:


All this time he'd thought they were about as different as two people could be. It was kind of fucking with his head, because the no-strings-attached, sex-as-stress-relief thing would only work if they barely tolerated each other on a personal level.

And Ryu asks "How could a relationship survive them being in constant competition, let along one of them being chosen above the other?"

Avon Gale and Piper Vaughn write beautifully about hockey - its sheer physicality, the rivalries and friendships, the intensity of community - but at times, the romance plot feels very one-note because, while there's abundant sexual chemistry, Ryu and Emmitt continually worry about who will be named the primary goalie and who will be in goal during the playoffs and little else. But the story all comes together beautifully when the Venom reaches the playoffs, Ryu and Emmitt truly become a couple, and the books ends with a great HEA.

I'm hoping the next book in the series featuring Morley: "I think sometimes if I ever did wanna date a guy, it'd definitely be a hockey player, 'cause think how sweet that'd be."