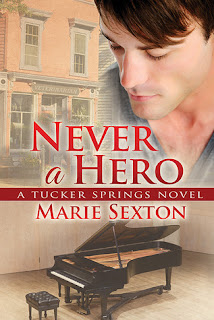 PLEASE NOTE: This works very well as a stand-alone, although characters from other books make brief cameos.

Owen has burrowed himself into a life revolving around his duplex apartment - he works from home, has his groceries delivered, and has no close personal relationships. He listens to his downstairs neighbor play the piano at night and wishes he could marry her. Not because he's attracted to her, but it would make his mother happy and he wouldn't be so lonely.

Owens' mother is a stone-cold b@tch, easily edging out Joan Crawford for The Worse Mother EVER. Owen's left lower arm is missing due to an congenital amputation / amniotic band restriction before birth and all his life, Owen's mother has belittled, demeaned and bullied him, resulting in his childhood stutter and low self-esteem. Owen thinks of himself as "a one-armed shut-in with borderline social anxiety." You basically want to shelter Owen and protect him from the world, while gently nudging him out of the nest and into a nice relationship.


Friendly, charming and smokin' hot Nick moves into the lower duplex apartment with his "girls" - his three dogs - and it soon becomes apparent Nick is that nice guy that Owen deserves. Nick's sister had an amniotic band restriction as well (her right arm rather than Owen's left) and Nick truly understands. And Owen likes Nick for so many reasons: "Because he was patient. Because he was direct yet not insensitive. Because he never laughed at me, and he made me feel safe." But ... Nick has a secret ...

Nick describes himself as dying of HIV and has decided to never again have an intimate relationship. Knowing this book is a reissue, I first checked to see if the book was originally printed many years ago, but it first published in 2013. Nick's attitude seems a bit .... archaic given the incredible advances in treatment and longevity.
... and I should have trusted in Marie Sexton because she resolves the secret and its impact on Nick's life quite perfectly as Owen confronts him:


[...] I'm tired of watching you act like some kind of martyr. This is about you. [...] You choose to let it define you. [...] It's about your issues ... your determination to let it dictate how you spend the rest of your life.

And Sexton uses this moment to illustrate how Owen used to do the same thing with his life, letting his missing arm define his life. This ties the whole love story together with a big red HEA ribbon. Well done! 4 strong stars for "Never a Hero."