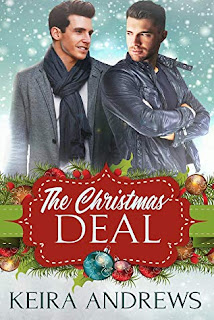 In wrapping my head around doing this review, I realize there is an awful lot of backstory and so much happening in this book, but it doesn't feel that way. Andrews takes all those details - small or large - neatly tucks them together and weaves everything into a really charming holiday love story full of family and new beginnings.

Logan has an entire basketful of descriptors - ex-marine, injured railroad worker, widower, unemployed, single dad - but the bottom line is he's a good guy, struggling with raising a teenager and still stunned by the loss of his job and friends and a marriage that happened for all the wrong reasons.

Seth is 37 (but reads a lot younger, IMHO), with an ex-boyfriend, few friends, and a job promotion he completely deserves .... but he needs a fake boyfriend to seal the deal. Enter his co-worker / best friend Jenna who offers her brother Logan up for the job and the story starts to unfold.

The real strength of The Christmas Deal is the well-developed cast of characters who make the "fake boyfriend" scenario believable and relatable. The new boss, Angela Barker, is a tough Southern broad who could have easily become a stereotype. But she is written with heart and a certain amount of tough-minded charm. Logan's sister Jenna is a gem of a character - warm and loving and nurturing - and constantly trying to dab away spit-up with a Tide pen.

There's sizzle and a spark right from the start between Logan and Seth, but Logan
can't quite get past his convoluted idea of being straight and yet occasionally "helping a buddy out" with an occasional blow job, hand job or "I'll fuck someone's ass if they want it. Like I said, it's just about getting off." [...] "I'm probably sayin' this shit all wrong. With guys, it's just quick and easy.." As Seth asks:


"But you're not gay."
"Exactly." Now Seth was getting it.
"Or bi?"
Logan scoffed, "Isn't that just being wishy-washy or pretentious?"

At first, Logan offers nothing more than casual sex but the way their relationship evolves and grows is equal part sexy as hell and sweet. And once we get more of Seth's backstory, I dare you to NOT feel your heart shatter just a bit:


For so many years, he'd told himself Christmas wasn't for him. That he didn't deserve it somehow. Standing in front of the tree, surrounded by holiday glitter and color, he ached down to his bones for this home to truly be his and not only for show.

Happily, Seth gets his wish, Logan and Seth get a perfectly wonderful HEA and The Christmas Deal leaves you with a warm sense of family and holiday cheer. It's a lovely way to start the holiday season! 4.5 stars and a Recommended Read.