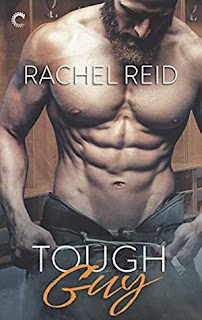 
Heated Rivalry is one of my favorite books in 2019 and it's a tough act to follow. After the smokin' hot enemies-to-lovers story of Shane and Ilya along with all the intense hockey action, at first it was difficult to get into this story of a man nearing the end of his hockey career and realizing that his only legacy will be as an on-ice thug.

Ryan Price hates the chant "Pay the Price" that accompany his fights and while known to be one of the toughest fighters in the league, he takes no pleasure in it. When Ryan becomes a Toronto Guardian and moves into a luxury apartment in the middle of Toronto's "Gay Village," he runs into Fabian. 13 years ago, Ryan lived for a time with Fabian's parents who housed members of the Halifax Breakers junior hockey team. Ryan is "starved for the light Fabian radiated effortlessly":


He liked men who ... blurred the line, a little. He found androgyny very sexy, and it wasn't just the phsycial beauty of a dazzling, decorated man that attracted him; he was in awe of their confidence. Of their bravery to openly be themselves and dare anyone to say anything about it. It turned Ryan on like nothing else.

And Fabian, who "had only known hockey to be a horrible, toxic thing that celebrated homohobic bullies," is stunned to rediscover Ryan: "When you walked into the store where I work, I was shocked. And then [...] I had this overwhelming feeling of relief. Like that was what I'd been waiting for. This was what was missing. You."

But there is no insta-love happily-ever-after for Ryan and Fabian - not without a lot of work on both men's parts as Ryan slowly comes to the realization that he could just quit hockey. And Fabian makes some mistakes along the way but the ending is beautifully done (and we get a hot glimpse of Ilya and Shane along the way.)  4 strong stars for "Touch Guy."