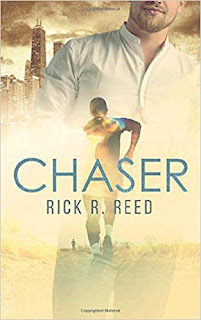 I suppose Caden could be called a "chubby chaser," but darn it, he just likes a sturdy guy with some heft and substance. And when he meets Keith at a Boystown bar, he is smitten. Keith, for his past, is taken with the lean, fit Caden who runs daily. After just a date (and a half) Caden is called home when he learns his beloved mother has cancer.

It's easy to love Keith, who is a kind nurturing man. But Keith isn't comfortable with his body and over the six weeks Caden is gone, Keith starts working out and loses 30 pounds in an attempt to surprise and delight Caden with his new fit body. But Caden is less than appreciative. As he tells himself "You like big butts. You like bellies. You want a man with a little meat on his bones. What's wrong with that?" and he wonders "Is sexual attraction supposed to have some sort of PC all-for-one and one-for-all universality?"

I like how Reed challenges our preconceptions about attraction and the part it plays in love. And as a counterpoint, Reed introduces us to Caden's best friend Bobby, who is all about the superficial and sheer sexual attraction. On the surface, Bobby has it all yet his life is empty and void of true emotional depth. It's very easy to hate Bobby and his malicious game-playing but definitely read "Raining Men" (which is Bobby's story) to get the whole story.

As a series, the two books work together beautifully as it strives to show how "the essence of a person doesn't change with his appearance. To the core, essentially, people are not a collection of blood, sking, bones, and muscle, but something harder to put one's finger on. The body is a shell, and it contains the fragile and ethereal spirit of the person."