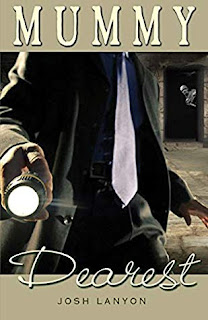 Professor Drew Larson is trapped in the jaws of "publish or perish" needing to authenticate what may be an Egyptian mummy in a small Wyoming museum. His boyfriend and boss ("a 55 year old anthropologist whose idea of a rip-roaring time is his mother’s garden party," but, hey, he happens to look like George Clooney) is expecting him back in San Francisco in 24 hours.

But Drew's plans are sidelined by Fraser Fortune and his film crew who have plans of their own. Fraser is host of:


“The Mysterious. It’s only one of the top-rated documentary series on TV right now.”

I snorted. “You mean that thing where they supposedly investigate ancient, weird or paranormal phenomenon and then wrap it all up in half an hour for the at-home viewers?”

“Yeah. That long-running, top-rated, award-winning thing that I produce, write and host.”

What follows is a fun romp involving a Halloween curse, a museum mystery and the start of a deliciously sexy relationship between Fraser and Drew.

"Mummy Dearest" was reissued in the fall of 2019 and the second book in the series, "Bite Club," is in the works. I'm looking forward to reading more about Fraser and Drew and their next adventure! 4 stars.