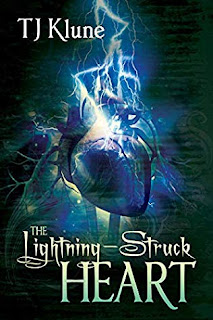 Thank you so much, ParisDude, for allowing me to repost your exceptional review of TJ Klune's amazing "The Lightning-Struck Heart."  The review was originally published by ParisDude in French on http://livresgay.fr/verania1 and I encourage you to visit http://livresgay.fr/

I have often wondered from where my fascination and love for fantasy novels stemmed—those books that describe imaginary realms, inexistent lands, kings, princes, magic, elves, witches, and enchanted forests. When these books are well written and their universe is well constructed, I think they simply remind me of the fairy tales I read in my childhood; reading them is thus a means as good as any other to keep in touch with my inner child.

Now imagine a world with a good and just king; with a handsome but haughty prince, his son Justin; with a shady, powerful wizard, Morgan; with the latter’s young apprentice, Sam, to whom we can already predict a glorious future; with magical and loyal creatures that surround the young man, namely the unicorn Gary and the semi-giant Tiggy; and, of course, with a valiant knight, Sir Ryan Foxheart, young and handsome and strong. That’s the kingdom of Verania in a nutshell—the fictional setting of T.J. Klune’s four-book-series.

But. What one doesn’t imagine straightaway is that this imaginary world with all the heroes and villains it comprises is not like in any other “fantasy” series. Not. At. All. Because Klune adds an essential ingredient without which all this wonderful construction would crumble: gay attitude. Well, he adds it and doesn’t pull his punches, either; no, he pours it into his books by the ladle. And the most beautiful thing happens: Kulne’s stratagem works. The readers might be a little disconcerted at the beginning when they note that more or less everyone is gay in these books. First of all: Sam, the main character, who tells his adventures in first person. Of course, he has a crush on knight Ryan, the handsome, muscular and dark dream-hunk; he’s as love-struck as a gushing teenage girl.
Unfortunately for him, the knight is already the very official fiancé of crown-prince Justin. Yes, in the wonderful kingdom of Verania, whether you’re straight, gay, bi, pan or asexual (to name but a few of the major variants), not only nobody cares, but people find it perfectly normal. Even the old king (apparently still a striking and tasty sugar daddy) often drops hints which suggest the late queen wasn’t the only person he “honoured” in his youth.

So, everyone is gay. Maybe not Tiggy, the semi-giant, a rather simple-minded but endearing lad, nor the great wizard Morgan, who we guess is asexual. But Gary is—you remember, Sam’s friend, the hornless unicorn. Very gay, mind you, a true Queen, colourful, uproarious, bitchy, spiteful, and completely obsessed with sex. He would make a drag queen on acid look like a poor debutante. The plot of this first volume revolves around a quest, as is wont in this kind of book. A dragon kidnaps the crown-prince; Sam, Tiggy, Gary, and Ryan are sent to rescue him. This first venture is a page-turner, especially since the romance between Sam and Ryan starts to get more and more precise (and how cute those two are!). Then, you discover that… even this dragon is gay! And about as sex-obsessed as Gary!

That’s the moment even the dimmest-witted readers would get it: this is a parody of the genre, a caricature as good as they get. I’d even add that you can’t get any better. Because what a riot! What a laugh! Yes, I laughed, and laughed, and laughed, giggling wile reading and bursting out laughing at the most hilarious passages. For a starter, the characters are a hoot; they’re all a bit “crazy”. Alright—they’re complete nutters. They say out loud whatever crosses their minds, loads of pointless rubbish more often than not, but funny, bitchy, salacious rubbish. Highly enjoyable. The dialogues between Sam and Gary in particular are priceless. All they ever think about is “it”, if you catch my drift, so they talk about “it” all the time, up to a point where I sometimes wondered where this whole badgering would take me. But Klune knows what he's doing, he leads his story with firm movements and makes the reader reach the end without actually getting lost.

So, in a nutshell, this is a book that I read with immense pleasure and that I will surely reread more than once. Now, good news: as I mentioned, this is a series, so I’ve got three more books to read.