The Intimate World of Abraham Lincoln 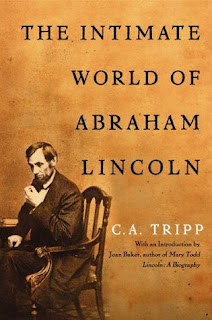 Well. I appreciate that Tripp gives us a heavily researched and deeply nuanced study of Abraham Lincoln's intimate history .... but honestly I must say this book is rather dry and does go on, and on, and on.  However, the author died just a few weeks after completing this book back in 2005 so I suspect it would have benefited from some heavy editing had he had the chance. Also, I will readily admit that I'm not the ideal audience for this purely academic work, so please take my review with a grain of salt.

Tripp, a psychologist, writer, and researcher for Alfred Kinsey, presents his belief that Lincoln was at least bisexual and probably homosexual. As evidence, he extensively analyses contemporary reports of Lincoln's very close relationships with a large number of men which may or may not have been sexual in nature, but relationships that were - none the less - very intimate and important in Lincoln's life. He contends that Lincoln reached puberty very early which can be an indicator of homosexuality, and also highlights Lincoln's love of very dirty stories and his lack of any interest in women as potential partners. He also thoroughly debunks the story of Lincoln's supposed love for Ann Rutledge.

Tripp forces readers to examine Lincoln's relationships without all the prejudices of past historians. "They were just close friends .... they only slept together because of necessity .... their relationship was more father/son ......" Presented as a whole over Lincoln's lifetime, it does appear that where there is smoke, there is fire. Or at least, we can't ignore evidence that Lincoln had deeply intimate relationships with many men over his life. 3.5 stars for very academic and long, but ultimately eye-opening, biography.