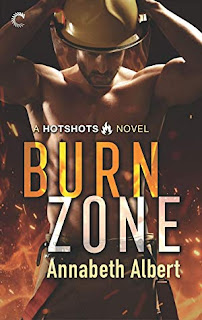 Annabeth Albert's Frozen Hearts was a great series (my average rating was 4.5 for the three books) so I am looking forward to  diving into Albert's new Hotshots series, which centers around wildfire fighters in Central Oregon.

Veteran smoke jumper Lincoln Reid is still mourning the death of his best friend and fellow smoke jumper Wyatt Hartman, so when Wyatt's younger brother Jacob shows up among the new recruits, Linc has a million reasons why Jacob shouldn't pursue his dream of becoming a smoke jumper.

Top of that list is Linc's sizzling attraction to Jacob, and Jacob's long-term crush on Linc.  The plot is very predictable in that Linc, who is still closeted at work, fights that attraction but the two men finally decide to give into their desires and hopefully get it out of their systems. "A sexual exorcism or something. Anything was better than all this pointless wanting and not having."  The sex scenes are plentiful and very steamy, and pretty much proof that Linc and Jacob belong together.

But Linc is stubborn in his belief that he cannot come out, cannot be with Jacob, will lose the love and support of the Hartmans, his surrogate family, and will lose the respect of his fellow smoke jumpers.  And when I say "stubborn," I mean STUBBORN as it not listening to reason, being completely closed off to any possibility of the relationship being accepted, just not gonna happen.  Linc's continued and insistent attitude personally drove me crazy, but I realize that other readers may not feel the same.

Despite a formulatic plot, and Linc's excessively dogged determination to not listen to reason, Albert does a good job in plumbing the nuances of Linc and Jacob's relationship and giving us well-fleshed out characters.  3. 5 stars for "Burn Zone" and I'm looking forward to reading "High Heat" coming out in July, 2020.

I received an ARC from Carina Press, via NetGalley, in exchange for an honest review.