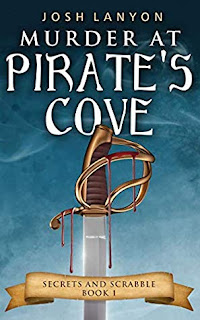 Charming. That's the word that keeps popping to mind in reading this first book in Josh Lanyon's new cozy mystery series. We meet Ellery Page, brought to a small seaside town due to an unexpected inheritance he received from his great-great-great aunt Eudora. He's now the opener of a dilipated house and bookstore, the Crow's Nest, in Pirate's Cove, Rhode Island.


"a ruggedly handsome six foot, one hundred and ninety-plus pounds of gainfully employed eligible male ... [Ellery] had been pretty sure Carson had a secret that would deeply disappoint the ladies of Pirate's Cove."

We are introduced to the community and its residents on the way to solving the crimes, along with some well-crafted red herrings, and I did not figure out the murderer until near the end, so it definitely held my interest.  Ellery is an interesting character and I relish learning more about him and also really like how Lanyon teases the possibility of a romance between Jack Carson and Ellery.

I am definitely looking forward to reading the next book in the series, Secret at Skull House, due at the end of March.  4.5 stars.

I received an ARC from the author, via NetGalley, in exchange for an honest review.