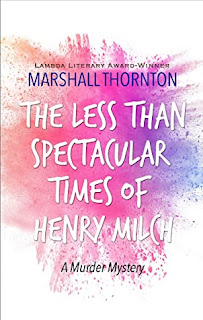 Marshall Thornton is the award-winning author of the Boystown (Chicago in the early 1980's) and Pinx Mystery (L.A. in the 1990's) series and his newest series is set in small-town Michigan in 2003.

20-something Henry Milch was working as a barista and partying nightly with his best friend Vinnie in West Hollywood, when his overdose (and subsequent 5150 initiated by his mother) results in Henry being banished to Wyandot County in the care of his fesity gun-toting conservative grandmother Nana Cole, who prays he will settle down with a nice girl (which is definitely not going to happen.)

Henry has a part-time job with the Wyandot County Land Conservancy (something to do with easements - he's not quite sure) and when he finds a dead body and learns there is a $15,000 reward for information leading to the capture of the killer, Henry decides to solve the murder, collect the money and get back to California.

There is an interesting cast of characters here as Henry works to solve the mystery and the plot will hold your interest as Henry delves into clues and examines relationships that might lead to the solution. But the best part of this book, IMHO, is getting to know Henry in all his early 20's irresponsibility.

Henry coasts along partying with Vinnie, secure in the knowledge that he is hot stuff in West Hollywood on a Saturday night, not really tuned into the fact that yeah, he does have a bit of a drug problem, and not quite getting it that his nickname ("Yeah, People call me Mooch") is never going to happen .... ever.  His credo for dealing with his grandmother and all parental types is:


The thing about parents - or in this case grandparents - is that if you don't make their controlling your life as agonizing as humanly possible they'll just do it more and more. [...] The wisest court of action is terrorizing them to the point where they barely want to speak to you.

Thornton gives us an abundantly screwed up MC who is finally growing up, without making his slow awakening seems like an afterschool special. Henry has still got a lot of work to do, but I find myself cheering for him and hoping that we'll have many more books in this series to watch his progress.  4 stars.

I received an ARC from the author, via NetGalley, in exchange for an honest review.